It’s been just over two weeks since I last wrote. I’m having a hard time writing, because I’ve become more self-conscious. This is not my story, but it reads like my story. I mean, THIS clearly is my story, but it shouldn’t be. That it is reflects my own self-absorption, or so it seems to me today. Also I’m getting less coherent by the day.

I don’t want to lose track of what happened when though, so here’s some bits and pieces.

I did go back home to Toronto. I went and spent a night in London, hanging out with Haroon and then Karin, an old friend in Clapham. Haroon and I went to see Shaun of the Dead at the BFI with a Q&A session (by Skype) with Edgar Wright and Simon Pegg afterward. While we were there, I managed to completely destroy my iPhone by grinding it to a pulp in the cinema seat mechanism. Joy. We went over to Covent Garden afterwards and bought a new one, since at this moment in my life I would rather deal with deferred debt than suddenly not having my phone.

The week at home was traumatic and surreal. Everything there was pretty well normal. And after that sudden speedup at the end of the previous week, I was internally freaking out about whether I was going to make it back in time. All the while of course dealing with trying to work, and trying to extract (and deliver) full value from the week at home with my family.

After the first few days of internal torture, a new kind of guilt-laden normality set in, and we had a really good birthday weekend for Lauren. Friday night, Lol and I went to see the Girl with the Dragon Tattoo (good but not as perfect as I’d hoped). Saturday we did the Eaton Centre (yay, NOT), the AGO, and wandered down to the Doc Martens store (largely squatted by Japanese hipsters) to buy her the most ridiculous boots we could find. 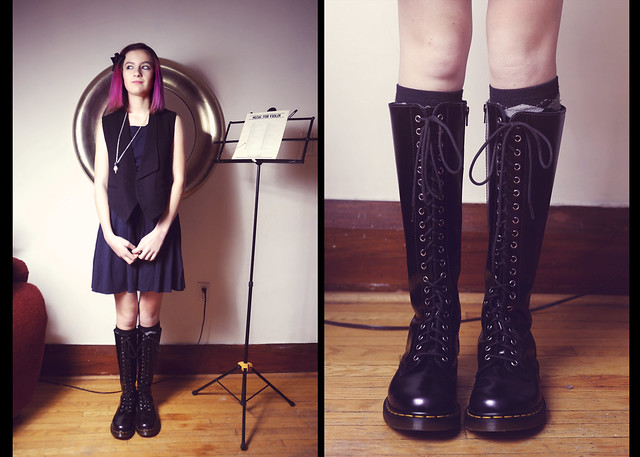 Sunday was a dark day for my soul, sitting and waiting to fly (2140 flight), watching Moon on Netflix, snuggling with Grace and Rachel on the sofa, feeling like I might not be back for some time. Having felt so wrong about being home at the start of the week, by the time I left I didn’t want to go. Not that this isn’t where I need to be. Just… well, it doesn’t have to make sense.

So now I’ve been back a week, and things are moving quickly. Mum is dopey and increasingly confused. She can’t hold her weight on her legs any more, so getting out of bed is out of the question really. She has the means to go potty without moving, but she doesn’t believe it, and when she finally does, she hates the idea. And since she forgets, we have a little routine every few minutes where she tells us she’s really going to have to go to the toilet, and we tell her about her magic pants. She laughs, comprehends, recoils, and on we go.

In any case, most of her physical sense of self (proprioception, sense of bladder or bowel state, hunger and thirst controls, etc.) is gone all to hell. Sometimes she’s panicky and upset, and knows she’s going “round the bend”, and “losing it”, and she doesn’t want to die. We hold her hand, cuddle a bit, give her (or me) a lorazepam. Now she has a morphine prescription, taking another step toward the endgame. We try to talk about the old times and memories she does seem to have available because that settles her a bit and helps displace her thoughts.

I was able to rent a violin and have been playing to her during the day. A couple of times she’s starting singing along, or giving me congratulations when I work on a bit and finally get it right. Almost like old times. All I need now is a sharp intake of breath whenever my intonation sucks. That would get old fast of course, since my intonation sucks ALOT at the moment. I dig the gnarly gypsy violin I picked up though, it’s all beat up and warm sounding.

The last two nights we’ve had night sitters coming in, which is a mixed bag. They are helpful, and we’ve gotten more sleep. But the reason we asked for them is that mum has been getting more agitated at night, sometimes a bit shouty and distressed, sometimes just talking lucidly about random things, then being asleep when you go to check. But whatever the reason, whenever you hear her, you have to go check. So sleep had become a fractured affair at best while I was gone, and when I got back it was clear that it wasn’t sustainable. One thing about a week away, you notice changes where someone who has remained might have missed the increments.

Mum doesn’t like being manipulated, and generally has a hard time being manhandled by strangers - the CAP teams who come to get her washed and dressed in the morning have felt her wrath on several occasions. Consequently, the night sitters are on very thin ice. The first one was lovely, and helpful, and mum seemed to like her. I stayed up with her just to be sure, and help with turning her (and learned a couple of useful things).

The second one though, last night, mum absolutely hated. She had an agitated night and shouted at the nurse, insisting on going to the toilet (cue the aforementioned conversation loop) every few minutes, then dropping off. Tonight, she got so angry about it that she started screaming and hitting me.

I’m going to leave it there for now. I’m not sure how regularly I’ll update any more. There’s more to tell about today and tonight, but I have lost the ability to judge what it is and is not appropriate to share. I am tired and lost and confused, and a little bit drunk. Perhaps some clarity will return tomorrow. Or perhaps tomorrow will be more fucked up than today. That actually seems more likely.