It’s been a week I guess, and I haven’t written anything down. The details seem so incremental and banal, and it munges together in my mind. Also, I’m now working, around my sister’s schedule, so time is short. But I don’t want to drop this effort to keep track of things, because it’s useful.

On Monday, we took mum down to St James’ Bexley Wing, the new oncology building. It isn’t much like a hospital, more like a posh mall with a touch of art gallery. There is a grand piano in the huge lobby near the obligatory Costa Coffee. One wonders when that gets broken out. Do people dance to quiet jazz? It seems wrong to have a live pianist in such an utterly non-smoking environment.

There was quite a long wait (partly because the appointment time we were given when we discharged mum last week was incorrect, although fortunately earlier than the real appointment), but the whole thing took about 20 minutes once we were in there. The doc looked around a bit using the ultrasound, found the lymph node, gave mum a local anaesthetic (the most painful part), and took the tissue sample. We watched the needle on the monitor all the way through.

Despite being told over and over by us and her friends how relatively innocuous the biopsy procedure would be, she was very anxious about it, and wound herself up into a bit of a panic as the appointment approached. Once in the waiting room, she was calmer but it was obvious she was working hard, and privately in hell. Afterwards, she was shocked that it was over, and very pleased that there wasn’t much to it.

I think this is typical of one of the patterns she’s developed, which is either caused by or maybe just exacerbated by her disease. She fixates on a misunderstanding which somehow becomes entrenched, and discards contradictory evidence. Sometimes it is something like this, grounded in fear of a real medical encounter. Sometimes it is pulled fully formed out of the air, or somewhere other than reality anyway. And because she doesn’t retain the attempts to persuade her otherwise, it stays with her.

Something similar happened today. My old friend Fergus, who lost his mother to MS some years back, has been stressing the importance of seizing the opportunity to do things with mum while we still can - while she can still appreciate them. This is wise advice to be sure, and with that in mind we went out for lunch today to the Mansion, a place which was my local pub throughout my youth.

But mum really didn’t want to go. She was lethargic and apprehensive, didn’t think she could manage stairs, was still unhappy when we addressed that concern by offering to use her wheelchair and carry her up and down the stairs (which worked great, and didn’t involve putting Liz’s back at risk, so there). This is the same as the resistance to being upstairs in a bedroom, where no matter how much you explain that actually there are more people closer to her up there than downstairs so she will actually be less isolated up there, she won’t let that fact undermine her right to feel isolated if that’s what she’s decided. It is the same pattern as her seeming inability to internalize the description of the biopsy process that came from medics, friends and from us.

It’s easy to put this down to her disease, but she has always been like this to some degree. Anyone who knows her will be familiar with her ability to completely reinvent memories, and even fully erase events that everyone else remembers. All in all, that this is not a new pattern makes it especially frustrating to deal with, because at one time anger and frustration seemed like a rational response, whereas now, at a time when her cognitive process is degrading, anger is really not at all appropriate. But you can’t change an emotional response overnight.

Of course lunch turned out to be a good time, and she was very happy and proud to have made it out. The idea of all those people around that she had found distasteful enough to call out as a reason not to go became a cherished part of the warm fuzzy she seemed to be experiencing. 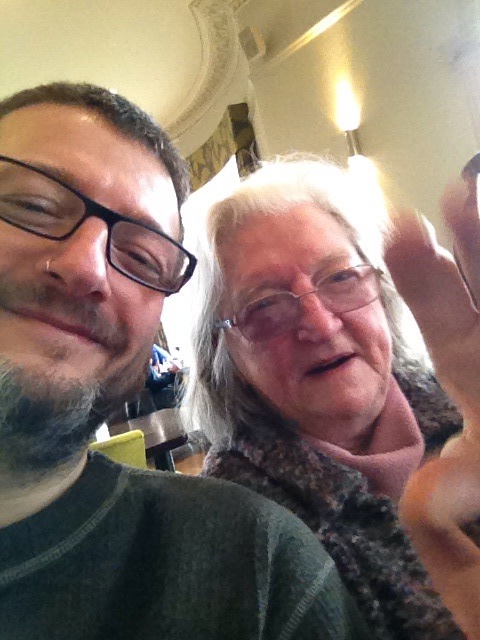 Later, apparently, she proudly explained to visiting friends how she had walked around under her own power. I guess she forgot about the wheelchair too. No matter.

Things are definitely worse than they were at the beginning of the week. Liz and I have talked about it and we agree, there is more forgetfulness, confusion, and something else I hadn’t seen but Liz recognized from when she was admitted to hospital: she is keeping her eyes closed quite a lot, while awake and talking.

Tomorrow I am calling the GP to see if the biopsy results are in, and find out which oncology area we need to talk to at St James’, so I can follow up and get a specialist assigned, and an appointment. I will mention this change and see if we can increase the dexamethasone dose again.

This has rambled a bit - I think that will be the way things are for a while now I have less time to myself. I will bookmark here some thoughts to write about soon:

Also, the ground here is wet ALL THE TIME.